My path led me to Osho’s Meditation Resort in Pune, India where on Dec 17th, 2006 enlightenment came upon me. Prior to me being introduced into Osho’s teachings, people who I had assisted on their journey kept saying how the words I spoke reminded them of Osho. Once I was in India it was natural for me to go to Pune and visit the Mediation center.

A great day of mediation and relaxing came to an abrupt halt. I was near the tomb of Osho’s parents when I felt and saw a tremendous energy come over me. After spending a week at Osho’s the night of December 17th on my birthday an inner explosion that can only be described as Aladin becoming the Genie. It felt as though my entire body could no longer hold that which I was.

Words came flooding back to me from Paramahamsa Nithyananda. The day I left the Ashram in Southern India, Nithyananda came to me and told me I had learned everything I need to know to become enlightened. He told me to go back to Vancouver and raise the vibration there. I was told that in 7 days enlightenment would come over me. Nithyananda laughed at that point and said he would be laughing as he knew what I would be going through. It was then when I dropped to my knees.

The pain was unbearable, the light was  immense. This was something that I never experienced before. My world as I knew it was changing and I could never go back. In that moment I truly became the 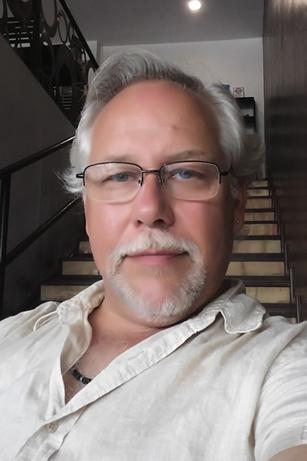 Growing up in Edmonton Alberta, it was amazing to have the teachers that I had show up in my life that did. My psychic abilities showed themselves immediately after the first change of life at a young age of 6. I was drawn early to answer the eternal questions of life. I was forever taking objects apart to discover how they ticked. I was fortunate enough at 13 to discover Transcendental Mediation and deeper answers to my questions.

I had internal battles from the very earliest memories. I knew what was the Truth, yet being told from the elders in the Kingdom hall that what they were speaking was the truth. I came to realize that man’s truth is not THE TRUTH. After studying most of the religions on this planet I found the golden thread that goes through all religions. I found that only the Love is real.

As an Enlightened Master I am here to remind you  that you are more than you think you are. The key to releasing your authentic self from your Egoic mistaken beliefs is in the book “The Soul Just Knows” rediscovering your soul purpose.

My Mother always told me to keep learning.I went on to study the traditional psychology approach to this question. At 14 years old I was immersed into Freud, Carl Jung, Fritz Pearls along with Carl Rogers forms of psychology. My understandings lead me deeper into the realm of self identification. During my late teens and early 20′s I began with experiential workshops from WernerErhard Seminars Training(E.S.T.) then SAGE workshops. I entered Tendai Buddhism and the world of Tantra.
I went on to study “A Course in Miracles” and began an advanced inner work at Cleamind International Institute. I went through a very dark night of the soul and was fortunate enough to have amazing support through my dark night. My soul came out in the light. After a few years I was facilitating workshops for Clearmind and once again realized there was more going on. Then it happened, I had just finished a 3 day workshop at Clearmind that I produced. It was the next morning at 3:00 a.m. when I was woke by a voice that said “Take notes, this is what you are hear to do” at which point I said “leave me the hell alone”.

I then began working another member of my family who brought his conscious awareness into the music industry in the UK. Together my nephew and myself worked the music and the other patented technology into a blend that simply is astonishing. You can find this amazing breathwork music at  www.blissbreath.ca

“One of the best workshops I’ve experienced in over 15 years.”

“The world needs to have your teachings. Thank you for everything you have done.”